Coming up this weekend: Asia Society will bring 20 leading authors and critical thinkers from China and India to NYC to engage in vital literary and cultural dialogue, as part of the inaugural Asian Arts & Ideas Forum: The 'Chindia' Dialogues. Here are two events not to miss:

UNDERGROUND & UNDERCOVER: LITERARY REPORTAGE
Friday, November 4, 12:30-2:00 PM
Free. No reservation required.
Featuring Siddhartha Deb, Yu Hua, Murong Xuecun, and Zha Jianying
Literary reporters bear witness to the effects of modernization – from massive internal migration and the commercialization of culture to the ravages of corruption and environmental degradation – with novelist/essayist Yu Hua (China In Ten Words); author and media critic Zha Jianying (Tide Players, and a participant in PEN's 2011 World Voices Festival event: China in Two Acts); Siddhartha Deb, who survived a stint as a “cybercoolie” at a call center in Mumbai to write The Beautiful and the Damned; and China’s pioneering cyber novelist-turned-investigative journalist Murong Xuecun (best-selling novel, Leave Me Alone: A Novel of Chengdu), who reported on a mafia-style “direct-selling” pyramid scam in Jiangxi that exposed the inequities in China's capitalistic development. Moderated by Orville Schell, Director of Asia Society’s Center for U.S-China Relations.

For a complete list of 'Chindia' events, visit Asia Society's Calendar
Posted by Leily at 11:28 AM No comments:

If you happen to be in the Chicago area between Nov. 4 through 20, don't miss Paper Back, Brian Dettmer's solo show at the Packer Shopf Gallery: 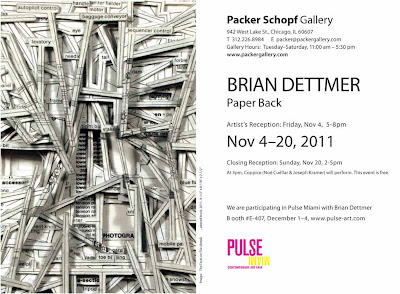 The book’s intended function has decreased and the form remains linear in a non-linear world. By altering physical forms of information and shifting preconceived functions, new and unexpected roles emerge. This is the area I currently operate in. Through meticulous excavation or concise alteration I edit or dissect communicative objects or systems such as books, maps, tapes and other media. The medium’s role transforms. Its content is recontextualized and new meanings or interpretations emerge.


Brian's art graced the cover and inner pages of PEN America: The Good Books. Learn more about his surgical processes by watching this CBS Evening News report and by reading "Postmodern Deconstruction" from The New Yorker.

Tonight PEN will be welcoming its newest members at PowerHouse Arena. Among them are poets Sandra Beasley, whose poem "Unit of Measure" is a must-read, and Terrence A. Hayes, a judge of this year's PEN/Joyce Osterweil Award for Poetry. Also, check out an interview with new member Teju Cole on his novel Open City, and an excerpt from frequent Festival participant, Peter Godwin's The Fear: Robert Mugabe and the Martyrdom of Zimbabwe.

The Asian American Writers Workshop Literary Festival happened this weekend, and some of PEN America’s favorite authors were honored!

Favorite poet Kimiko Hahn, recipient of the 2008 PEN/Voelker Award for Poetry, was honored for her collection Toxic Flora.

Check out Amitava Kumar’s essay, “A Collaborator in Kashmir” from PEN America Issue 10, and support him at the festival this weekend—his book A Foreigner Carrying in the Crook of His Arm a Tiny Bomb won the nonfiction award.

For more information about the prizewinners and the festival click here.

(credit: Marion Ettlinger)
Posted by Leily at 10:18 AM No comments:

Selections from PEN America 14: The Good Books are now online! Here are a few of things you can check out over at PEN.org:

Forum: The Good Books
Welcome to the World's Greatest Book Swap: writers sharing books that they love--what could be better? We were blown away by the thoughtful responses we received, and by how many! Over fifty writers participated in our virtual swap. We've posted a few, with more to come. For now, have a look at Maurice Berger on Roland Barthes's Mythologies and Barack Obama; Srikanth Reddy on Chinese Tales and translating a translated translation; Rabih Alameddine on The Book of Disquiet and the many heteronyms of Fernando Pessoa.

The 1986 PEN Congress, 25 years later
We culled through almost 3,000 pages of previously unpublished transcripts to bring you highlights from a literary event spearheaded by Norman Mailer and featuring Arthur Miller, Nadine Gordimer, Gunter Grass, Toni Morrison, Czeslaw Milosz, and many more. (Check out Rhoda Koenig's long write-up of the event in New York Magazine for some of the glamor and gossip surrounding the '86 Congress.)

Among the pieces we included is one we call "From Voice to Voice," in which remarks by Saul Bellow touch off responses from Allen Ginsberg, Nadine Gordimer, Susan Sontag--but enough with my name-dropping, go have a look yourself. And make sure to read "From the Floor," too, in which Grace Paley and Margaret Atwood protest the under-representation of women writers at the Congress (and Norman Mailer offers his perhaps inflammatory rebuttal).

World Voices
The issue also features fiction, poetry, and essays by some of the participants in this year's PEN World Voices Festival, including Marcelo Figueras, Asaf Schurr, Najat El Hachmi. And there are three essays from Finding the Words, an anthology compiled by our sister chapter PEN Canada: Pasha Malla & Moez Surani assemble an "Ethical Code for Writers," Alain de Botton revisits places of unexpected inspiration in "On Writing," and Madeleine Thien ghost-hunts through Cambodia and Vietnam in "Photocopies of Photocopies: On Bao Ninh."

Artwork
What's the sound of a sword cutting into a book? A book being sliced? Paper falling? ZAK, SHAKA, BARA BARA. Check out Book, a great comic by Yuichi Yokoyama with awesome onomatopoeic translations by Taro Nettleton. There's more book slicing and dicing to be seen in the sculptures of Brian Dettmer (our wonderful cover artist), and some quotation re-appropriation by Jenny Holzer.

As usual, you can find all of this and more if you subscribe to PEN America or purchase a copy of the journal.
Posted by Leily at 11:49 AM No comments: 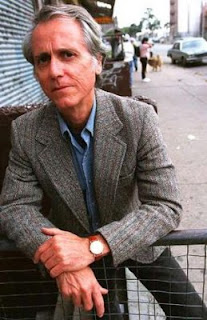 Earlier this week, The Millions reported that Don Delillo would be releasing his first ever collection of short stories this November, The Angel Esmeralda: Nine Stories. The stories are drawn from the years 1979-2011; many of them first appeared in Esquire, The New Yorker, and Harper's. (You can see a full list of Delillo's short fiction here.)
Among the stories is "Human Moments in World War III," which was reprinted in PEN America 13: Lovers after DeLillo received the PEN/Saul Bellow Award for Achievement in American Fiction last year (the story first appeared in Esquire in 1983).
The story was accompanied by PEN Q&A with DeLillo, in which he talks about Bellow, American fiction, technology, the role of the writer, and more. You can read the opening of "Human Moments in World War III" here; the Q&A is here.
Posted by Shelby at 11:43 AM 1 comment: 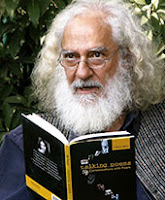 In The New York Times Book Review this past Sunday there's a great piece by August Kleinzahler, "Rebirth of a Poet," which praises Arvind Krishna Mehrotra's translation of Songs of Kabir. More so than his predecessors, Mehrotra manages to "[capture] the ferocity and improvisational energy of Kabir's poetry."

Kleinzahler includes quotations from the poems "Friend" and "It's a Mess," both of which were included in PEN America 11: Make Believe, and read by Paul Auster during the issue's launch party.

Arvind Krishna Mehrotra was a recipient of a PEN Translation Fund Grant in 2009, the same year that he was nominated for the chair of Professor of Poetry at the University of Oxford, alongside Ruth Padel and Derek Walcott. (Here's a Times article about the unusually controversial race.)

The PEN Translation Fund provides grants to support the translation of book-length works of fiction, creative nonfiction, drama, and poetry that have not previously appeared in English or have appeared only in egregiously flawed translation. Read more about PEN's Translation Committee here.

If you haven't already, check out the online feature for PEN America 11: Make Believe. You can purchase the issue and any of our other issues, or become a subscriber, by clicking here.

(Photograph of Arvind Krishna Mehrotra courtesy of The Telegraph.)
Posted by Leily at 12:15 PM 1 comment: