...will be held February 24 at 7 pm in the Great Hall at Cooper Union. André Aciman, Edward Albee, Anthony Appiah, Ron Chernow, Lydia Davis, Deborah Eisenberg, Nathan Englander, Janet Malcolm, Francine Prose, and Sarah Ruhl will read from past issues and will join us at a reception. Tickets are available at smarttix.com.

I'm excited about that great lineup of terrific writers and think this will be a wonderful event. It should also go a long way in ensuring the future of the journal. Here are the full details:

If you can't make it, but would like to support the journal, there are three other things you can do:

1. Get yourself or someone you know a subscription (just $18 a year!).
2. Ask your local library (or your school library) to carry the journal.
3. Donate. We've created a new circle of individual supporters, and we have some nice thank-you gifts to offer, too.
Posted by David Haglund at 10:51 AM 2 comments:

One of the scholasticists behind me said, "Let's go. We've seen everything. I don't want to spoil it." This seemed a sound aesthetic decision. Williams' last word had been so exquisitely chosen, such a perfect fusion of expectation, intention, and execution, that already it felt a little unreal in my head, and I wanted to get out before the castle collapsed. But the game, though played by clumsy midgets under the feeble glow of the arc lights, began to tug at my attention, and I loitered in the runway until it was over. Williams' homer had, quite incidentally, made the score 4-3. In the bottom of the ninth inning, with one out, Marlin Coughtry, the second-base juggler, singled. Vic Wertz, pinch-hitting, doubled off the left-field wall, Coughtry advancing to third. Pumpsie Green walked, to load the bases. Willie Tasby hit a double-play ball to the third baseman, but in making the pivot throw Billy Klaus, an ex-Red Sox infielder, reverted to form and threw the ball past the first baseman and into the Red Sox dugout. The Sox won, 5-4. On the car radio as I drove home I heard that Williams had decided not to accompany the team to New York. So he knew how to do even that, the hardest thing. Quit.

Read the rest.
(Photo of John Updike in 1955, shortly after he graduated from Harvard, by Hulton Archive/Getty Images. "Hub Fans Bid Kid Adieu," Updike's account of the last game Ted Williams played as a member of the Boston Red Sox, was published in the October 22, 1960 issue of The New Yorker.)
Posted by David Haglund at 2:54 PM 1 comment:

From The New York Times:

President Obama’s 18-minute Inaugural Address on Tuesday was generally lauded by Americans for its candor and conviction. But the Chinese Communist Party apparently thought the new American president’s gilded words were a little too direct.

China Central Television, or CCTV, the main state-run network, broadcast the address live until the moment Mr. Obama mentioned “communism” in a line about the defeat of ideologies considered anathema to Americans. After the translator said “communism” in Chinese, the audio faded out even as Mr. Obama’s lips continued to move.

That same day, Edward Albee, Margaret Atwood, Don DeLillo, and many other writers from around the world signed a letter calling for the release of Liu Xiaobo, a "prominent dissident writer, former President and current Board member of the Independent Chinese PEN Center, who has been detained since December 8, 2008 for signing Charter 08, a declaration calling for political reforms and human rights. Liu Xiaobo is being held under Residential Surveillance, a form of pre-trial detention, at an undisclosed location in Beijing, and no charges against him have been made known." 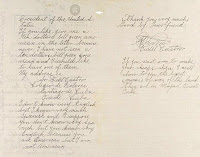 Meanwhile, Amitava Kumar shares a less serious letter (pictured right; click image to enlarge), this one written by a very young Fidel Castro to FDR: "President of the United States, If you like, give me a ten dollar bill green American..." Also see the latest issue of Politics and Culture, made up of letters to Obama from academics, and Thanks and Have Fun Running the Country: Kids' Letters to President Obama, published by McSweeney's and 826 National (excerpts here).

And lastly, many thanks to the National Book Critics Circle, which has awarded PEN American Center the Ivan Sandrof Life Achievement Award. (They also just announced the finalists for the 2008 NBCC Awards, a group that includes recent PEN America contributors Aleksandar Hemon and Marilynne Robinson.)
Posted by David Haglund at 11:28 AM 1 comment:

Via Ted Genoways at the VQR blog, an interesting post by Mike Chasar on Robert Frost’s reading at JFK’s inauguration (a post that draws on an excellent online feature about Frost in VQR from a few weeks ago). Chasar’s post is inspired by Elizabeth Alexander’s impending appearance at the Obama inauguration.

PEN America 7: World Voices features a terrific talk by Alexander on “the relationship of African writers and Africa at large to American writing,” along with two of her poems. The first of these, “The African Picnic,” begins like so:

World Cup finals, France v. Brasil.
We gather in Gideon’s yard and grill.
The TV sits in the bright sunshine.
We want Brasil but Brasil won’t win.
Aden waves a desultory green and yellow flag.
From the East to the West to the West to the East
we scatter and settle and scatter some more.
Through the window, Mama watches from the cool indoors.

Obama, by the way, is only the third president to have an inaugural poet: Kennedy selected Frost, Clinton invited Maya Angelou and Miller Williams (whose daughter Lucinda is also a pretty good writer), respectively, to his two inaugurations, and now Obama has invited Elizabeth Alexander.(Photo above by George Silk, and taken from Life magazine’s excellent online photo archive.)PS. Also on the VQR blog, Ted Genoways selects his top ten 2008 poetry collections, a list that includes The Earth in the Attic, by Fady Joudah.
Posted by David Haglund at 11:27 AM 1 comment:

Note: this year (2011), the deadline for applications is February 3.


Applications for grants from the PEN Translation Fund are due one week from today. Grants range from $2,000 to $10,000 and support the translation of book-length works of fiction, creative nonfiction, poetry, or drama that have not previously appeared in English or have appeared only in an egregiously flawed translation.

In addition to financial assistance, grants from the PEN Translation Fund provide a good bit of publicity: recognition by the Fund has led on numerous occasions to a publishing contract. Translations supported by PEN grants have been excerpted in The New Yorker, Granta, The Paris Review -- and, of course, in PEN America. Making Histories included a great piece from Theremin, a play by Petr Zelenka translated by Stepan Simek.

PEN American Center now has a page on YouTube. There you'll find Chinese dissident Liu Xiaobo talking about freedom of expression in his country, Sam Shepard reading from his notebooks, Sufjan Stevens performing solo on the piano-- and much more, including this magnificently eloquent speech by Toni Morrison, delivered at the PEN gala last year: