“Reckoning with Torture” in Washington, D.C.

Back in October, PEN and the ACLU teamed up for “Reckoning with Torture: Memos and Testimonies from the ‘War on Terror’.” Don DeLillo, George Saunders, Eve Ensler, and many others read from declassified legal memos, tribunal transcripts, and sworn statements made by both military personnel and detainees, in an attempt to call attention to the torture policies of the last eight years and to push for legal accountability and moral reckoning.

Next Wednesday, March 3, at Georgetown Law School’s Hart Auditorium, we will present a similar program, this time featuring three members of the United States Congress—House Judiciary Chairman John Conyers, Keith Ellison (the first Muslim ever elected to the U.S. Congress), and Bobby Scott—along with Paul Auster, Alice McDermott, Aasif Mandvi of The Daily Show, and many others. This event happens in the wake of a report issued by the Office of Legal Counsel’s Office of Professional Responsibility, which criticized the authors of the torture memos for “poor judgment,” but did not recommend any disciplinary action.

Join us if you’re in D.C. If not, you can watch it live here. You can also watch the October event in its entirely on PEN’s YouTube page. Below, Don DeLillo reads “a generic description of the process” used to interrogate “high value detainees” under the Bush administration.

Posted by David Haglund at 4:20 PM No comments:

Goodreads in Iran, Esterházy in New York, Achebe on Baldwin—and other links

* On the same day that PEN and five other organizations announced a campaign to win the release of more than 60 writers, journalists, and bloggers currently imprisoned in Iran (a campaign entitled “Our Society Will Be A Free Society”), the community manager of Goodreads revealed that the Iranian government appears to have banned their website in Iran. Today, as part of the “Our Society Will Be A Free Society” campaign, PEN and its partner organizations called on Iran to allow United Nations human rights experts into the country.

* On March 1, acclaimed Hungarian writer Peter Esterházy will read from his masterwork, Celestial Harmonies, at the 92nd Street Y, with musical accompaniment provided by his friend the composer András Schiff. A conversation will follow. Read PEN America contributor Alesksandar Hemon’s review of Celestial Harmonies before you go. (Afterwards, read Esterházy’s conversation with Wayne Koestenbaum in PEN America 9: Checkpoints and translator Judith Sollosy on Esterházy right here on the blog—and finally you should read Judith’s translation of Not Art, which was published yesterday, and is, as I understand it, about mothers, as Celestial Harmonies is about fathers.)

* PEN is reflecting on Black History Month with a terrific online feature that includes, among many other things, the audio of Chinua Achebe paying tribute to James Baldwin, video of Chris Abani in conversation with Walter Mosley, and a comic by Mat Johnson.

* The latest contributor to Granta’s online series New Voices is Billy Kahora, who studied in Scotland and now lives in Kenya. His story is intriguingly titled “The Gorilla’s Apprentice.”

* Lastly, our latest issue received a lovely review on NewPages.com. Among the highlights of the issue, according to reviewer Terri Denton: “The Anthology of Small Homes” by Sara Majka, a short story that Denton calls “a masterpiece—it’s that good.”
Posted by David Haglund at 3:19 PM No comments:

“Our Society Will Be A Free Society”

PEN has joined forces with The Committee to Protect Journalists, Reporters Sans Frontières, Index on Censorship, Canadian Journalists for Free Expression, and the International Publishers Association for “Our Society Will Be A Free Society,” a campaign to free writers imprisoned in Iran after last year’s disputed presidential election there.

The campaign was named for a pledge the Ayatollah Khomenei made during the 1979 Iranian revolution to protect freedom of expression, a promise that has not been kept. The Iranian-Canadian journalist and documentary filmmaker Maziar Bahari helped kick off the campaign with an op-ed in The International Herald Tribune, which describes his experience after being arrested last year:

Your government had issued me a press card. But I was coerced to make a false televised confession admitting that I was acting as an agent of evil Western media. I was forced to say the media are trying to overthrow the Islamic government. I was beaten and threatened with execution to make that confession. I was beaten again after the show because I did not perform as well as my interrogator would have liked. Yes, Ayatollah Khamenei, I had to apologize to you on television to stop my torturer from punching me in the head.

Before last year’s election, the Iranian novelist Shahriar Mandanipour called attention to the restrictions on freedom of expression in his country with a novel, Censoring an Iranian Love Story. (That novel grew out of a story he describes in the essay “The Life of a Word,” published in PEN America 8: Making Histories.)

Mandanipour’s novel was praised last month on the blog of The New York Review of Books by Claire Messud. Censoring an Iranian Love Story, she notes, “is not only directly concerned with contemporary Iran... it is also playfully engaged with Persian literary history, and at the same time, is formally innovative: the influences of Calvino and Kafka are evident in his ironic narrator’s metafictional banter.”

In other news about free expression—and the lack thereof—PEN president Anthony Appiah has expressed his profound disappointment—though not surprise—at the news that the Chinese government has rejected the appeal of Liu Xiaobo's 11-year sentence for “inciting subversion of state power”:

Liu Xiaobo’s three words to the court—‘I am innocent’—stand as an unanswered indictment of the system that condemned him; they will echo in China and around the world until he is released. 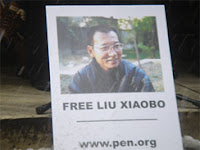 Yesterday, Anthony Appiah, the current president of PEN American Center, published a letter nominating Liu Xiaobo for the Nobel Peace Prize, citing Liu’s “distinguished and principled leadership in the area of human and political rights and freedom of expression.”

Appiah’s letter was endorsed by a number of prominent PEN members, among them Philip Roth, Salman Rushdie, Don DeLillo, Jhumpa Lahiri, and several of the writers who rallied for Liu Xiaobo on New Year’s Eve, including Edward Albee, E.L. Doctorow, and A.M. Homes (pictured right is a sign from the rally; the photo was taken by Brian Montopoli).

Vaclav Havel, Desmond Tutu, and the Dalai Lama have also asked the Nobel committee to consider Liu for the Peace Prize.

Ma Zhaoxu, spokesman for the Chinese Foreign Ministry, “said it would be a mistake to give Liu such an award,” according to Ben Blanchard and Huang Yan of Reuters:

“If the Nobel Peace Prize is awarded to such a person, it is obvious that it is totally wrong,” Ma told a regular news briefing in Beijing, without elaborating.

No citizen of China has ever won the Nobel Peace Prize.

Meanwhile, according to the AP, the head of Norway’s Conservative Party, Erna Solberg, nominated Russian human rights activist Svetlana Gannushkina and her group Memorial for the Prize. PEN worked with Memorial to honor Natalia Estemirova, who was affiliated with Memorial, in October. Estemirova herself spoke with David Remnick about slain Russian journalist Anna Politkovskaya at a 2006 PEN World Voices event; you can listen to their conversation at PEN.org.
Posted by David Haglund at 1:40 PM No comments: