Billy Collins on poetry e-books (and in PEN America)

The AP writer Hillel Italie published an interesting piece this week on poetry and e-books that was picked up by a number of outlets.

“Poetry,” Italie writes, “the most precise and precious of literary forms, is also so far the least adaptable to the growing e-book market. A three-line stanza might be expanded to four if a line is too long or a four-line stanza compressed into three if the second and fourth lines have sharp indentations, as with Henry Wadsworth Longfellow’s Hymn to the Night.”

Or as happened with some poems by Billy Collins when Collins took a look at his newest book on his Kindle. He found that, as he tells Italie, “if the original line is beyond a certain length, they will take the extra word and have it flush left on the screen, so that instead of a three-line stanza you actually have a four-line stanza. And that screws everything up.”

Collins goes on to say, rather poetically, that “prose is kind of like water and will become the shape of any vessel you pour it into. Poetry is like a piece of sculpture and can easily break.”

Collins contributed two news poems to the latest issue of PEN America, “Horoscopes for the Dead,” parts I & II, and, as it happens, they begin with the experience of reading that great emblem of print, the newspaper—specifically, the horoscopes of a departed friend. I think I can reproduce their stanzas faithfully on this blog, so here’s how the first one begins:

Every morning since you fell down on the face of the earth,
I read about you in the newspaper
along with the box scores, the weather, and all the bad news.

Sometimes I am reminded that today
will not be a wildly romantic time for you,
nor will you be challenged by educational goals
nor will you need to be circumspect at the workplace.

Another day, I learn that you will miss
an opportunity to travel and make new friends
though you never cared much about either.

I can’t imagine you ever facing a new problem
with a positive attitude, but you will definitely not
be doing that or anything like that on this weekday in March.
And the same goes for the fun
you might have gotten from group activities,
a likelihood attributed to everyone under your sign.

In the second, he puts the paper away:

I am better off closing the newspaper,
putting on the clothes I wore yesterday
(when I read that your financial prospects were looking up)
then pushing off on my copper-colored bicycle
and pedaling along the road by the shore of the bay.

To read the rest—along with poems by Paul Muldoon, Anne Carson, and many others—you’ll have to pick up a printed copy of PEN America.
Posted by David Haglund at 5:43 PM 1 comment: 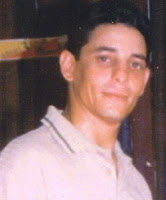 Journalist Normando Hernández González (pictured right) was freed from prison in Cuba Saturday morning. He was arrested in 2003—one of 75 writers and activists jailed in a major crackdown on dissent—and sentenced to 25 years in prison for criticizing the government’s management of tourism, agriculture, fishing, and cultural affairs. His prison conditions were reportedly deplorable and he was hospitalized repeatedly over the past seven years.

As his health declined, PEN mounted an increasingly urgent campaign on his behalf, awarding him the PEN/Barbara Goldsmith Freedom to Write Award in 2007 and pressing the Cuban government to provide adequate medical care and grant him a humanitarian release. He was finally released as part of an agreement between Cuban authorities and the Catholic Church to free 52 political prisoners, all jailed since the March 2003 crackdown. He will reportedly fly to Spain with his wife and daughter today.

Meanwhile, Saw Wei, whose subversively acrostic poem “February the Fourteenth” we published in PEN America 10: Fear Itself, has given an interview to the The Irrawaddy, a magazine that covers Burma and other parts of southeast Asia (it's named for a river in Burma; credit to The Literary Saloon for spotting the interview). As previously noted, Saw Wei was jailed for disturbing public tranquility with a poem; happily, he did more writing while in prison:

I wrote some poems and essays while I was in prison. I have to make some final revisions to an essay called “Modern Art and Modern Images.” Before I was put in jail, I had already written about 50 short stories and planned to publish the stories in one go. But I couldn’t finish that, because I was imprisoned.

For the community work, we have a group called “White Rainbow.” We need more members. I want to go everywhere to help our people. If there are no restrictions, I will continue this work.

Meanwhile, a Colombian journalist, Hollman Morris, who was recently selected to participate in the Nieman fellowship program at Harvard, has been denied a visa by the United States. “We were very surprised. This has never happened before,” the Nieman curator, Bob Giles, is quoted as saying in an AP story about the case. PEN, the ACLU, and the American Association of University Professors have sent a letter to Secretary of State Hilary Clinton protesting Morris’s exclusion.

On a lighter note, if you’re having a hard time letting go of the World Cup, here’s a possible antidote: 32 books to add to your reading list, one from each finalist nation—courtesy of Anderson Tepper. For Brazil, he selects Clarice Lispector, and suggests you join in the discussion of her final work, The Hour of the Star (New Directions), at PEN.org/penreads. That discussion has been quite interesting so far; “Clarice is not mysterious or (worse) obscure,” writes one participant in the conversation, who seems familiar with her work in Portguese, “she is intense.”

Update: The AP has the first photographs (taken by Arturo Rodriguez) of Hernández landing in Madrid. 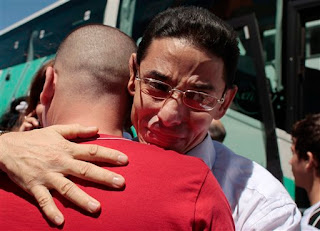 Posted by David Haglund at 3:55 PM No comments:

PEN Reads has begun with this short essay by Colm Tóibín. Check it out and weigh in with your own thoughts. And if you haven’t already, get a copy of The Hour of the Star and stay tuned to PEN.org/PENReads for more in the weeks ahead. (It’s a short book so you needn’t worry too much about falling behind—or resort to watching the movie... though apparently it’s pretty good?)

The Rumpus also has a book club and until Friday they’re giving away free books.

Also via The Rumpus: Etgar Keret (beloved contributor to PEN America) describes for the online magazine Tablet his practice of writing fake dedications. When “a total stranger” asks you to sign a book, he says, what can you write that doesn't sound smarmy or false? Which leads him to this conclusion: “If the books themselves are pure fiction, why should the dedications be true?” One book he inscribes: “To Avram. I don’t care what the lab tests show. For me, you’ll always be my dad.” And in another, which someone has asked him to sign for his girlfriend, Keret writes: “Bosmat, though you’re with another guy now, we both know you’ll come back to me in the end.”

Keret’s countryman and fellow short-short story writer Alex Epstein has just published in the United States a collection of his really wonderful stories (translated by Becka Mara McKay)—ten of which were featured in PEN America 12: Correspondences. Words Without Borders has both a review of the book and a video interview with Epstein. He participated in the PEN World Voices Festival this year, so you can also watch him converse with Norman Rush, Claire Messud, et al; listen to him discuss the short story with Aleksandar Hemon, Yiyun Li, and others; and hear him participate in the PEN Translation Slam.

And you can read the stories we published in PEN America 12: Correspondences. Here’s the shortest one:

THE MELANCHOLY OF ANTIQUE TELEPHONES

In ’83, the horoscopes are never wrong. After ten years, she moves the rotary telephone from the living room into the bedroom. Every morning, upon waking, she lifts the receiver and listens to whispering and rustling and rattling, as at a window. Maybe this is time, suddenly returning. Maybe this is rain. Maybe this is already her mother tongue.

Read the others here.
Posted by David Haglund at 11:54 AM No comments: