Applications for grants from the PEN Translation Fund are due in two weeks. Grants range from $2,000 to $10,000 and support the translation of book-length works of fiction, creative nonfiction, poetry, or drama that have not previously appeared in English or have appeared only in an egregiously flawed translation.

In addition to financial assistance, grants from the PEN Translation Fund provide a good bit of publicity: recognition by the Fund has led on numerous occasions to a publishing contract. Translations supported by PEN grants have been excerpted in The New Yorker, Granta, The Paris Review -- and, of course, in PEN America.

February 3rd is also the deadline for most other PEN Awards. You can find out more information here.

Submissions for the PEN/Diamonstein-Spielvogel Award for the Art of the Essay, the PEN/ESPN Lifetime Achievement Award for Sports Writing, and the PEN/E.O. Wilson Literary Science Award are due by March 3rd. 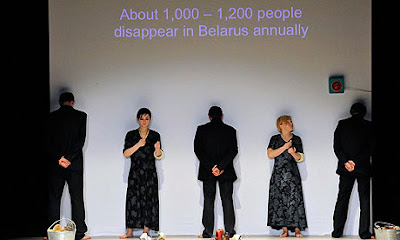 Just a few weeks ago, the members of the Belarus Free Theater were either in jail or in hiding. Now they are performing their play Being Harold Pinter as part of the Under the Radar Festival in New York. Soon they will be back in Belarus, where they will continue to risk the wrath of President Aleksandr Lukashenko, the man known as “Europe’s last dictator.”

On the eve of their return to Minsk, the Belarus Free Theater joins internationally-acclaimed playwright Tom Stoppard, PEN American Center, and a stellar supporting cast for an evening celebrating artistic freedom and the courage of hundreds of writers, artists, journalists, and intellectuals targeted in Lukashenko’s latest crackdown following the nation’s flawed December elections.

Czech musician Iva Bittova and American actor Billy Crudup will join Don DeLillo, E.L. Doctorow, Tom Stoppard, and surprise guests for a farewell gathering featuring literature, music, and cocktail conversation about the power of art and the future of Belarus.

All proceeds to benefit the Belarus Free Theater.

(Photograph of the Belarus Free Theatre performing in London taken by Keith Pattison.)
Posted by David Haglund at 11:55 AM 1 comment: