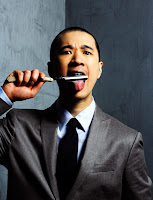 “Is literature about ‘understanding’? Does that make sense to you?” So Richard Ford asks Nam Le (pictured left, in a photo by Nigel Parry taken for Esquire) in the pages of PEN America 11: Make Believe. The conversation is called “Fabrications,” and part of it is online (for the rest you'll need to buy the issue).

The conversation is full of such quick, barbed, and illuminating back-and-forths. Ford asks Le about writers and place (“I think we’re all in an eternal nowhere all the time,” Le says), writers and lying (“what you’re doing as a writer is engaging in a big con”), writers and science (“I think of myself as an unashamed vitalist, a crackpot chemist of words”), writers and politics (“I think we use the word ‘politics’ the way we use the word ‘emotion’... ‘Aw, I got really emotional at that point,’ we say, as though emotion is something that exists on the edge of experience... but we’re awash in an ocean of emotion all the time”).

Eventually Le gets going about the problems with “character-based fiction.” He doesn't want readers, he says, to think that “a story between this person and that person is the ambassadorial story for their time and place in history.” And they go on to discuss writing reviews (or not), Nam’s story “Love and Honour and Pity and Pride and Compassion and Sacrifice,” and the way that writing fiction can be, as Ford puts it, “a kind of clerical nightmare.”

Read the online portion, then pick up a copy and enjoy the rest.

PS. There are two PEN events coming up soon. The first is on Wednesday, December 2, at Housing Works at 7 pm. Uwem Akpan, Juan Felipe Herrera, Lily Hoang, and Brendan Curry will talk with Jane Ciabattari of the National Book Critics Circle in celebration of the 2009 Beyond Margins Awards.

Then, a week from today, at 6:30 pm at NYU Law School, a group writers, legal scholars, and advocates including Nadine Strossen, Laura W. Murphy, Walter Dean Myers, Jonathan Todres, Deborah Ellis, Uzodinma Iweala, and Kuklin will discuss the Convention on the Rights of the Child (CRC), which the U.N. General Assembly unanimously adopted in 1989 and which was instituted as international law in 1990. The U.S. and Somalia remain the only two U.N. member nations that have not ratified this document.

Both events are free and open to the public.
Posted by David Haglund at 10:42 AM No comments: 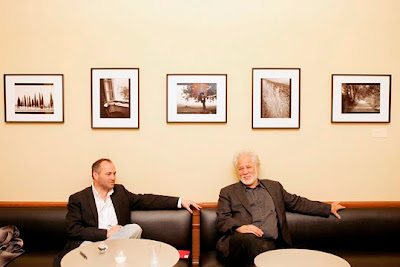 As those who come to the PEN World Voices Festival know, Colum is also a great conversationalist, and he has talked with several writers in our pages. In PEN America 8: Making Histories, he talked with Arthur Japin*, Laila Lalami, Imma Monsó, and Michael Wallner about “inventing the past” and with David Grossman, Milton Hatoum, Anne Provoost, and Jeanette Winterson about “writing myth now.” Fear Itself includes not only “A Code for the Disappeared,” the piece adapted from Let the Great World Spin, but also Colum’s great conversation with Michael Ondaatje, in which Colum asked Ondaatje, “Do you have fun?”

In that conversation with Ondaatje Colum describes his job as a writer in a way that will likely resonate with those who love Let the Great World Spin:

Congratulations to a wonderful writer.

(Photo of Colum McCann and Michael Ondaatje by Beowulf Sheehan.)

* Speaking of Arthur Japin, his novel Director’s Cut, narrated by a filmmaker not unlike Federico Fellini and excerpted in Making Histories, will be published by Knopf in English in February.

Posted by David Haglund at 11:07 AM No comments:

Obama in China & other links

As you may have heard, Barack Obama has addressed the matter of press freedom on his visit to China. PEN American Center has been calling for Obama to speak up for free expression on this visit (see the letter signed by PEN president K. Anthony Appiah). It appears that Obama’s comments are being censored from Chinese news reports.

A “leading” member of president Nicolas Sarkozy’s party in France, one Éric Raoult, is arguing that the latest winner of the Prix Goncourt, the nation’s highest literary prize, should “be censured and asked to recant” for comments she made back in August about “the climate of heavy policing and surveillance [under Sarkozy].” Marie Ndiaye won the Goncourt for Trois femmes puissantes (Three Powerful Women), and she is the first black woman to win the award.

Colum McCann’s novel Let the Great World Spin, excerpted in PEN America 10: Fear Itself, is up for the National Book Award this week, and it also tops Amazon’s “Best of 2009” (via The Millions).

Back around Halloween, Gigantic talked with Brian Evenson about horror movies. (Evenson’s brilliant and eerie story “Windeye” appears in PEN America 11: Make Believe and is also available on the PEN website.)

Lastly, The Rumpus has several good literary pieces up:

a long interview with Paul Auster, whose latest novel, Invisible, was deemed his finest ever by Clancy Martin in The New York Times Book Review

excerpts from a piece by Sigrid Nunez on Susan Sontag (who said, “I saw the best writers of my generation destroyed by teaching,” Nunez recalls) that was recently published in Tin House (read Nunez's story "Rapture Children" in our new issue)

and a tribute to An African in Greenland by Terese Svoboda (“I understand my curiosity about sex but why do I adore reading about bad food?” she asks), whose lovely contribution to our “Make Believe” forum is up on the PEN website, along with a bunch of other interesting responses (post your own!)

Posted by David Haglund at 1:14 PM No comments: 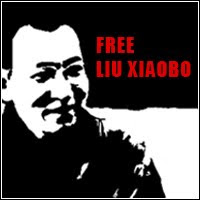 I’ve mentioned Liu Xiaobo before. The renowned literary critic, writer, and political activist was a visiting scholar at Columbia University in 1989 when he decided to return to China to support the pro-democracy movement. He staged a hunger strike in Tiananmen Square and led calls for a broad-based, sustainable democratic movement. He helped prevent further bloodshed by supporting and advancing a call for non-violence.

He spent two years in prison for his troubles, and three years of “reeducation through labor” beginning in 1996 after he publicly questioned the role of the single-party system and called for dialogue between the Chinese government and the Dalai Lama of Tibet.

More recently, he co-authored Charter 08, a declaration calling for political reform that has been signed by hundreds of individuals from all walks of life throughout China. He was detained in December of last year and formally arrested in June, charged with “inciting subversion of state power.” If convicted, he could face up to 15 years in prison. Liu Xia, his wife, has only been permitted to visit him twice.

Friends of Liu gave some of his poems to Larry Siems and Sarah Hoffman, who have been spearheading PEN American Center’s China Campaign, last year, and for the most recent issue of PEN America, the excellent American poet Jeffrey Yang (who earlier this year won the PEN/Osterweil Award for Poetry) translated four of them. Liu dedicated each one to his wife, Xia. Judging from the dates, most (and perhaps all) of the poems appear to have been composed during his three years of “reeducation.” Paul Auster read the poems at our launch party, and later recorded his readings. Here is the first of the poems that he read:

One Letter Is Enough

You can both read and listen to all the poems here. The U.S. Congress, by the way, passed a resolution calling for Liu’s release just a few weeks ago. You can sign a petition calling for his release here, and you can hear, and watch, Liu himself talking about democracy and free expression here.
Posted by David Haglund at 5:28 PM No comments: 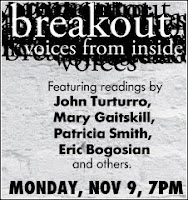 Next Monday, November 9, PEN’s Prison Writing Program will hold its second annual benefit reading and reception, with readings by Mary Gaitskill, Eric Bogosian, John Turturro, Patricia Smith, Jamal Joseph, Lemon Andersen, and other guests. As an installment of WNYC’s signature series “The NEXT New York Conversation,” this event will be broadcast and live-streamed, allowing incarcerated men and women with radio and/or internet access to listen to the event and join our audience.

Posted by David Haglund at 11:10 AM No comments: