All Along the Silk Road: Music and Literature from China 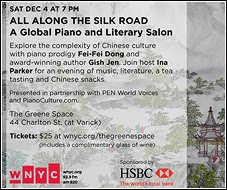 This Saturday, PEN, WNYC, and PianoCulture.com present the second installment of their literary and musical collaboration: “All Along the Silk Road,” featuring a piano performance by Fei-Fei Dong, a reading by Gish Jen, and a tea tasting that will include Chinese snacks.

The event will take place at 7 pm in WNYC’s lovely and intimate Greene Space at 44 Charlton Street in downtown Manhattan. Tickets are available here, and full details are below. Hope you can make it.

When: Saturday, December 4, 7 pm
Where: The Greene Space at WNYC, 44 Charlton St., New York City
Who: Fei-Fei Dong and Gish Jen; hosted by Ina Parker-Howard
Posted by David Haglund at 3:18 PM No comments: 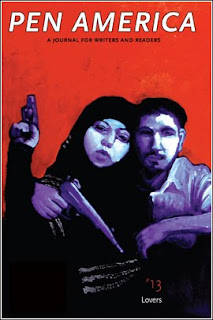 Who is dear to you? The new issue of PEN America—at the printer now; you can order it here—considers that question through fiction, poetry, short essays, comics, and conversations. Among the highlights:

* Don DeLillo’s 1983 “Human Moments in World War III” imagines the loneliness of a man in space, meditating on his fading connection to his old planet. Alongside this story is a Q & A on writing, technology, religion, and paranoia, conducted by fax (as you can see, DeLillo crafted his elegant answers on a typewriter).

* Writers salute their literary loves in the issue’s forum (and, online, readers can describe their own). Among the contributions: Yusef Komunyakaa on Frederick Douglass, Anne Landesman on J.M. Coetzee, Lily Tuck on Joan Didion, John Barth on his four fictional “navigation-stars,” and Jessica Hagedorn on Roberto Bolaño.

* Several new short stories, including “The Pretty Grown Together Children,” in which Megan Mayhew Bergman conjures the voice of conjoined twins, and “Before the Next World Cup,” Eshkol Nevo’s story of friends who consider the future with the aid of the world’s favorite sporting event.

As an exclusive online feature, we’ve also put together a gallery by Daisy Rockwell, aka Lapata, called “The Rasas of Terror.” Rockwell’s painting Couple graces the cover, pictured above.

There’s much more in the issue itself, which you can order here—or better yet, subscribe, and get a free copy of the 2010 PEN/O. Henry Prize Stories, featuring Alice Munro, Annie Proulx, Chimamanda Ngozi Adichie, and other great writers.
Posted by David Haglund at 2:48 PM No comments: