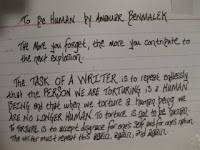 On October 13, PEN American Center will team up with the ACLU to stage a public reading of recently-released government files—memos (like this one: PDF), declassified communications, and testimonies by detainees—documenting acts of torture carried out on behalf of the U.S. government since September 11, 2001. Tickets are on sale here.

The event is part of an ongoing effort by writers associated with PEN to call attention to and reflect on these abuses. Among the participants are writers Paul Auster, Don DeLillo, Eve Ensler, and Art Spiegelman. They will be joined by former U.S. interrogator Matthew Alexander, former CIA officer Jack Rice, ACLU lawyer Amrit Singh, and the artist Jenny Holzer.

I'll be sharing more news about this project in the future; in the meantime, full details for the October 13 event are below.

Tickets: $15/$10 for PEN/ACLU Members and students with valid ID at www.smarttix.com. Tickets may also be purchased at the door.

(The note card pictured above is explained here; click on the photo to enlarge. The lines on the card are from "To Be Human," a short piece by Anouar Benmalek published in PEN America 10: Fear Itself.)
Posted by David Haglund at 4:15 PM No comments:

The day after tomorrow, PEN will (as in years past) spend a September Sunday at the Brooklyn Book Festival, a wonderful event full of bookish people and organizations of all kinds.

PEN also has a public program at the festival, which we're co-sponsoring with Tin House. Rasskazy: New Fiction from a New Russia will feature readings (from this new anthology of new Russian fiction) by Dale Peck, Francine Prose, Anya Ulinich (whose excellent and much-discussed story "The Nurse and the Novelist" was in PEN America 9: Checkpoints), and Vadim Yarmolinets. Also, Emily Gould, who has written about Russian-American writers for Russia! magazine, will interview Rasskazy contributor Dmitry Danilov about the literary scene back in the mother country.

Free and open to the public.

This event immediately follows "Name that Author," a game of literary trivia sponsored by the National Book Critics Circle in which I'll represent PEN America and attempt to carry on PEN's proud trivia tradition by dethroning last year's champion, Brigid Hughes of A Public Space.

Hope to see you Sunday.
Posted by David Haglund at 4:28 PM No comments: 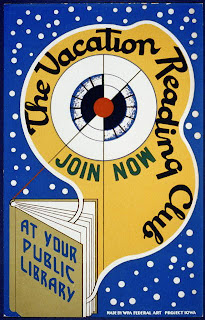 Happy Labor Day.
Posted by David Haglund at 11:58 AM No comments: