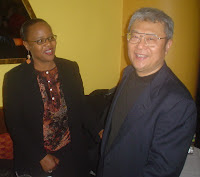 At Tuesday evening's sold-out tribute to Chinua Achebe, celebrating the 50th birthday of Things Fall Apart, Edwige Danticat (pictured left, afterwards, with Ha Jin) began by explaining why she liked Achebe before she'd ever read his books. "I loved his name," she said. "He seemed like family-- he has a strange name, too. Now I say that," she added, "about Barack Obama." (Big round of applause.)

Chimamanda Adichie also spoke of seeing herself in Achebe and his work. Her first stories, she said, which she wrote when she a small girl, were about "English children with blue eyes who ate apples, played in the snow, and had dogs named Socks." She hadn't learned, she said, that "people like me could exist in books." Achebe taught her that.

Chris Abani was drawn to Achebe for a different reason: to pick up girls. His older brother's "shtick for getting girls," he said, was to quote Achebe. And so Abani, looking for tips, read Things Fall Apart-- the first book he had read by an African writer, after spending his youth devouring everything from "The Silver Surfer to Dostoevsky."

Colum McCann read the Yeats poem "The Second Coming," from which Achebe got his title; Suheir Hammad performed one of her own poems; Ha Jin spoke about being a "migrant writer in the English language," and said that Achebe worked to "extend the frontier" of English through his "mastery of the language." Toni Morrison read some of Achebe's words on that subject-- out of an anthology she put together in the late '60s for high school classrooms (which, she noted ruefully, made it into very few classrooms).

Finally, Achebe himself took the stage, after an introduction from Leon Bottstein. He said that Things Fall Apart "wrote me," and then told an amazing story about sending his manuscript of the novel-- the only one he had!-- to England so that it could be professionally typed. He only got it back with the help of an English woman he knew in Nigeria. When asked what he would have done if it had been lost, he said, with dry, dark humor, "Probably the same thing that Okonkwo did."

Other reports on the evening here, here, and here.

PS. Remko Caprio raises some challenging points in the comments (scroll down), and has the most thorough overview of the evening I've seen over at his own site.
Posted by David Haglund at 2:31 PM

I was there and very surprised that Obama's name was mentioned, as if current American politics have anything to do with the emancipation of Africans from European colonialism. This black view of the world that contemporary African Americans display these days (90% of blacks vote for Obama) was totally misplaced I think, as was the applause that rose from the benches. It discredits the discussion that occurred about the African struggle and claims it as a black American struggle. There's lot to be gained if black Americans do not impose their American issues onto Africa as a neo imperialist moral product.

The evening was very interesting however, I just think the title of this post is misrepresenting the spirit of the night.