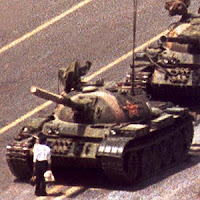 Update: Hua Hsu, blogging for The Atlantic Monthly, notes the closing of blogs and the disbarring of lawyers just in time for the anniversary -- and also links to this alternate history in which the democracy movement of 1989 prevails.
Posted by David Haglund at 10:55 AM

Events have shown the established literary world in the U.S. to be as closed as the one in China.
How long can the hyypocrisy go on?
www.penpetition.blogspot.com

An excerpt from my main blog,
www.kingwenclas.blogspot.com:

We've seen how the people at PEN American Center handle dissidence in the U.S. They don't! They turn their backs on it.

Which is what makes PEN's recent award to Chinese dissident writer Liu Xiaobo so hypocritical. If PEN staff and officers were in China, they'd be members of the one-viewpoint literary system there. They would be part of the bureaucratic monolith treating him like a pariah for speaking uncomfortable truths. Can there be any doubt of this? (The writer-bureaucrats might even refer to him in a derogatory way as "a smelly bum.")

If none of them will speak up for a milder dissident here, and risk possible smudge on their career, in a less authoritarian system, why would anyone believe these conformists would speak up about ANYTHING if they were approved writers in China? The idea is absurd.