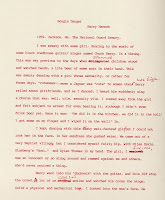 Our new issue, Correspondences, tries to examine the ways all literature is a form of correspondence—letters from writers to readers, from writers to the world. It features a work of fiction by Lily Hoang based on a letter she found; an excerpt from Anne Carson’s new “book in a box,” made in part of old letters from her late brother; and Rick Moody’s reflections on “tweeting” a story (he reflects in 140-character segments, of course).
It also features a forum in which writers either compose a short letter to another writer (or a fictional character) or tell a story about their experience with one of the new technologies of correspondence (email, Facebook, Twitter, etc.).
We’ve begun posting some of their pieces on PEN.org, and the latest to go up is a letter from Sam Lipsyte to Barry Hannah:

I was a Jewish kid from New Jersey. My literary heroes were meant to be Roth and Bellow and maybe Updike, for ethnic variety. Their accomplishments rightly endure. But your books burned me down. You sang, you startled, you dreamed, you mourned and exulted and laughed with new sounds, new sentences. Perhaps they bore the magic of the languages your character Ned Maximus (“thirty-eight and somewhat Spanish”) speaks: “white, Negro, some Elizabethan, some Apache.” And no matter how reckless your leaps, your sentences and your paragraphs, like tiny genius gymnasts, stuck every landing.

Read the whole thing. And write your own letter while you’re there. Oh, and buy the issue, too.
(The image above is a Barry Hannah manuscript, found here.)
Posted by David Haglund at 4:38 PM