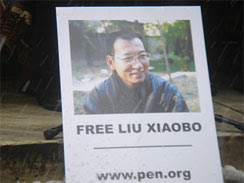 The "Read the rest" link leads to the same excerpt on the NYT website.
Would it be possible to obtain a copy of the original poem in Chinese? Thanks!

If you email me at david@pen.org, I can send you a Chinese version. Also, I believe Graywolf will be publishing the collection in a bilingual edition -- though it won't be out until 2012.

I would like a chinese version of the poem as well. I sent you an email also.

Thank you for your good work for writers.

My poem for Liu Xiaobo

"Who is Liu Xiaobo"